The QuinLED-Dig-Octa system is different vs the boards that came before (The QuinLED-Dig-Uno and the QuinLED-Dig-Quad). The reason for this is that both the brainboards and powerboards are really meant to be building blocks in a larger system.

But, even though it’s meant to run with multiple boards, each brainboard is it’s own entity and we rely on software features within WLED or ESPixelstick (firmware most often run on the ESP32 microcontroller for LED control) to either support this or allow externally generated data to be shown.

If you are going to be running WLED effects only you can do so with the brainboard connected over WiFi or wired to Ethernet. Since all LED data is generated inside of the ESP32 the network connection type is not that important.

WLED features a method where multiple controllers can be synced to run the same effects. Since this only sends through what effect to run it doesn’t generate a lot of network data. This also means that there is no continuous sync over multiple controllers so again either using WiFi or Ethernet won’t make a very big difference.

If you do wish to run an LED strip or pixel string divided over multiple controllers and for these effects to be in perfect sync as if it’s a continuous LED strip, the setup is a little bit different. Instead of setting up a sync of the effects and data, starting from WLED 0.13 you can setup a remote controller in the LED preferences menu and it’ll all act like it’s one big continuous strip so even effects like “comet” will act like they’re moving over the multiple controllers like it’s one whole using this “DDP” option! 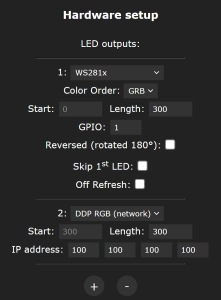 This option is a bit more latency sensitive though so especially if you are running this over multiple controllers it’s advised to have these controllers connected using Ethernet to not have to deal with WiFi congestion which could introduce hiccups and stuttering to the LED effects.

*When setting this up, one ESP32 will be generate the effects and it does not have unlimited processing power, please keep that in mind while designing your setup!

Another way to run your LEDs is not by using effects that are locally generated on the ESP32 module but having another program such as xLights, Vixen or Madrix generate the effects and send it to your controller over the network. Generally this is called “receiving real-time pixel data”.

This is very latency sensitive so any delay or hiccup in network traffic will very visibly show in the LEDs which is of course very un-desirable. Since WiFi is a hub environment and not a switched basically only one device can be receiving packets at the same time. For normal client workloads this is not a problem, even with a few clients connected to the same Access-Point but if you are real-time streaming pixel data this very quickly gets congested.

So for anything real-time pixel related it’s very much recommended to use the Ethernet connection on the board. Ethernet does not have the same issues as WiFi in regards to congestion and can easily send and receive data between several devices at the same time. So using this method you can run lots of controllers that stay perfectly in sync with whatever is sending the pixel data to them.

Both WLED and ESPixelstick are capable of using the Ethernet interface on the Brainboard-32-8L and are capable of receiving Artnet, E1.31 (protocols of sending LED data over the network).

Since ESPixelstick v4 there is a new hybrid mode you can use. This basically means you can run multiple controllers over WiFi but instead of sending all pixel data over the network in real-time each controller has an SDcard slot on which the actual show data is saved. The network is now only used for syncing multiple client controllers to the central show running software (mostly FPP).

This reduces the load on the network by a huge amount since all the heavy lifting is done locally on the ESP32 itself and only timing and sync packets travel over the network. Using this method it should be fine to run a few controllers over wireless and have no latency or other related issues.

This method is new in ESPixelstick v4 and it’s as of yet unknown what the maximum amount of controllers on a single Wireless Access-Point is that would be recommended. But if you want to run a show with a few remote controllers and don’t want to run Ethernet wires to them this is a great hybrid option!