Initially I developed and prototyped this board with some other features in mind, but that’s going to be an upcoming project. Currently the QuinLED-Data-Booster (Maxi) board has the following features: 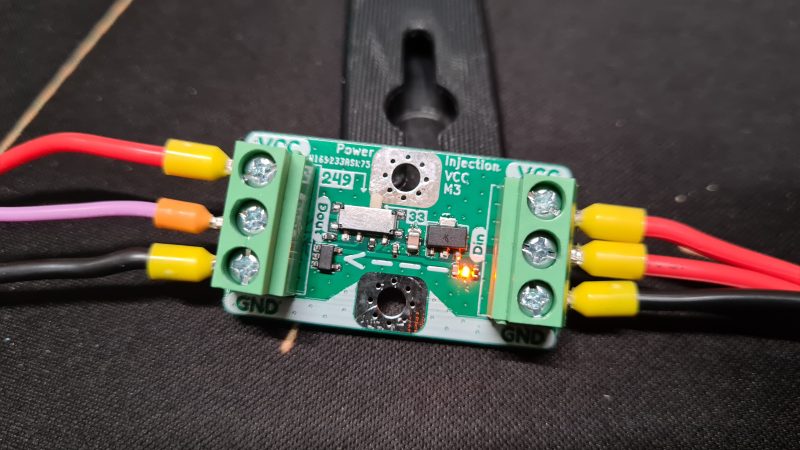 The QuinLED-Data-Booster can be used in several situations where it might help you with issues you are having with your LEDs.

Adapt the data signal to either a separate data cable or 3-wire type cable!

One of the main uses for this board is to condition the data signal for the type of cabling you are going to use. Once your data wires becomes longer then 3m/10ft issues can occur which can make your LEDs flicker or misbehave, this board can help with that in some cases.

A long explanation will follow but for now know that the QuinLED-Dig-Uno v3 and QuinLED-Dig-Quad v2 have 249Ω resistor on the board and are tuned for running a separate data wire. Or most important, not a cable combined with GND close to it for a long distance. If you are running a 2-wire (GND + Data) or 3-wire (VCC + GND + Data) cable, it’s recommended to use a 33Ω resistor since it’ll help the data signal go much further on that type of cable.

If you intend to run 3-wire cable (like xConnect and such) it’s highly recommended to either replace the output resistor with a 33Ω 0603 version on the QuinLED-Dig board or run a QuinLED-Data-Booster behind that port and it’ll condition that data signal for you without any soldering!

You can find a bit more information about the how and why in the following article.

Another function of the board is taking in weakened data signals and sending it out strong again. The selected level-shifter on the board is much better then a pixel in determining if a 1 or a 0 is coming in, it “cleans this up”(*) and then send it out strong again. Using this half way the data wire or even sometimes at the end can help the data signal enough to remove issues.

Adding a QuinLED-Data-Booster before you do a data wire cross-over from one strip to another with a bit of cable in between it can also really help get the data signal to cross the distance!

*It cannot cleanup externally introduced corruption in the data signal!

Partly linked with the Data Signal Boost above is doing a middle run bridge. If you want to run an LED strip, then bridge a gap and then have another LED strip there often you need a bit of a boost in the data signal to traverse that (cabled) gap. The signal that comes from the LEDs themselves often is much less strong then for instance directly from a QuinLED-Dig board. Putting a QuinLED-Data-Booster at the end of the first LED strip and running data through it to the next point will help a lot in bridging longer distances!

You can put a QuinLED-Data-Booster in between your pixels or strips and any injection you add to the board will flow both ways!

The QuinLED-Data-Booster isn’t going to solve all your LED data issues, starting with a good signal (like the QuinLED-Dig boards deliver) is a good starting point like is shown in my “max cable length” article, but some situations require conditioning to different cable types, mid run bridging (between LED strips) and/or power injection and this is where this board can help out. So if you are worried about data run you are going to do, maybe pick one or a few up and it might just be able to fix your issues! 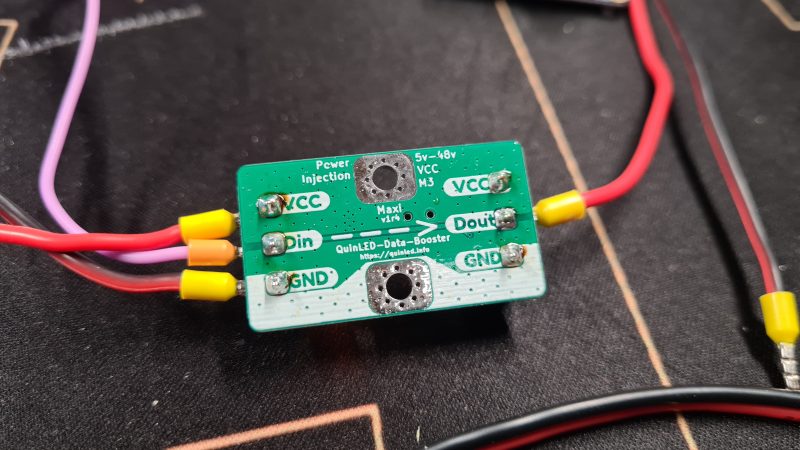