Can you run LEDs over POE?

TL;DR Yes, in a limited capacity it turns out you actually can!
Video at the end of the article!

Ever since I’ve starting talking about the custom QuinLED-ESP-ABE (Antenna Board + Ethernet) and especially running a QuinLED-Dig-Uno or QuinLED-Dig-Quad together with one of those making it a fully Ethernet enabled LED controller board (works perfectly in WLED!), people have been (partly jokingly) asking me if it will have POE support.

And well no, it doesn’t make sense to me to integrate POE hardware into my ESP32 Ethernet board, the usability would be very limited, especially running it together with LEDs. The cost to integrate all the hardware is also prohibitive. 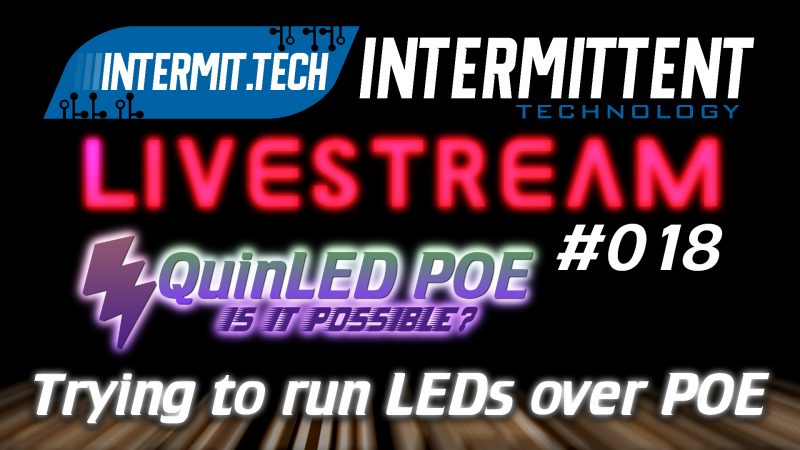 But all that time I already had a potential solution to this in mind and that is using a POE splitter. These are little blocks you plug your POE fed UTP cable into and it splits out the Power and Data signal. You attach a small Ethernet cable, now without power, into the Ethernet board and have separate power to play with.

POE itself is 52v-48v and we won’t be able to use that for much regarding the ESP32 or LEDs. But there are also splitters with integrated buck converters giving you 5v or 12v out and those are voltages we can use!

The amount of power you can get out of POE is very limited. There are losses on the cable and if you then buck convert it down to 12v or 5v with let’s say 85% efficiency you end up with a lot less then the common 802.3af 15w or 802.3at 30w would suggest.

I recently did a livestream where I tested a few splitters from Aliexpress to see how much usable power we could actually get from these blocks, and well, I actually wasn’t disappointed, 2 of them did better then I expected!

I did also tested an ultra cheap adapter, which failed completely when drawing a bit of load for a minuten or so, it’ll likely be ok running just the board using 5vEXT with 12v (pre-assembled Dig-Uno_v3 and Dig-Quad_v2 only!!) but maybe just avoid and get a better quality one as listed above!

I used this switch to run all tests, I’ve been using it for a bit over a month now and it’s worked quite well! :
🌟 10port POE Gigabit switch 120w used
👉 https://s.click.aliexpress.com/e/_9G67iZ

So the conclusion then, can you run Digitally Addressable LEDs such as ws2812b, sk6812 or ws2815 using POE? Yes, yes you can actually and it works better then I expected! You have to keep power in check a little bit (WLED power limiter is your friend!) but then it should be fine really.

I can see this being useful if you for instance want to run a few LEDs in your garden and don’t want to mess with AC power, but for DC 5v the wires would be too long. Run some Ethernet with POE and then run like 100-200LEDs and you’ll be perfectly ok (using one of the high-quality adapters) I expect!

So is the QuinLED-ESP32-ABE or QuinLED-Dig-Uno/Dig-Quad truly POE enabled? No, not natively, but I’d say these cheap POE splitters are a perfectly workable solution to people who have a use case for them!