Sometimes LED strip just can’t cost what you need to pay for Premium quality LED strip, often not all applications even need that kind of quality. Like in your garage or other large area where you will need large amount of strip and can’t justify using the best quality. A compromise between the Premium and cheap stuff is what I call the Good Quality strip, during my testing I encountered several of such strips. They aren’t good enough to go into the Premium category but certainly aren’t crap, have a decent CRI, decent light output and decent build quality, check them out below!

Gree makes very good LED strips but since they are using less thick PCB material in the strip (to lower cost) the limit light output accordingly so while these LED strips are less bright (about 1/3rd of the Colordiode) they also use less power and the quality of the light is still quite good! If you want good quality light but don’t need a lot of it, the Gree Lamps strips are a very nice “good quality” strip!

600LED 24v only Cri/Ra 90 strip (Available in different colors,2500k has been reported to look really pink!) 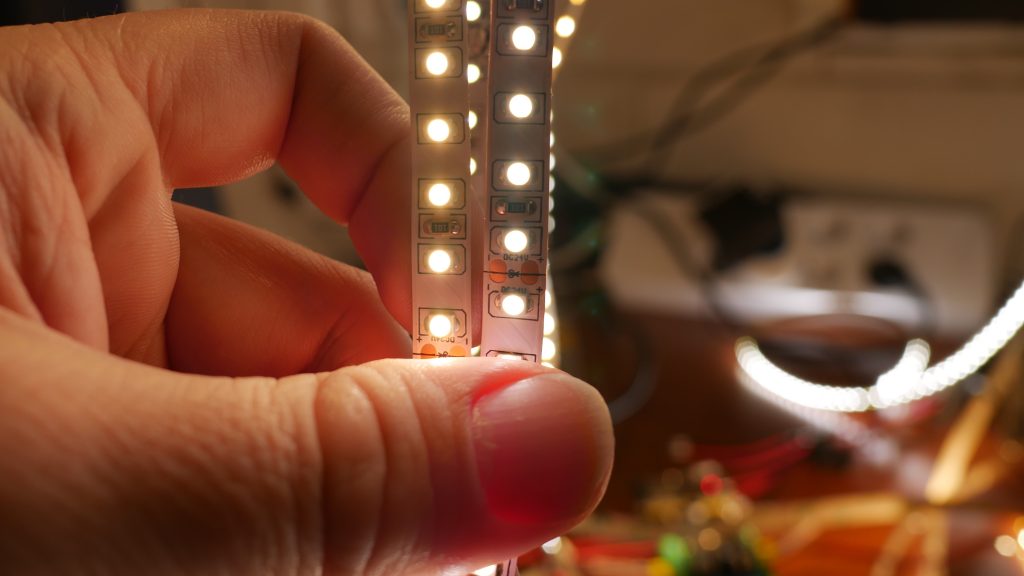 Recently I tested a 240LEDs/m strip from this store and was pleasantly surprised. This strip strikes a good balance between cost while having high quality LEDs and outputting a decent amount of light! The 240LEDs per meter makes it that it also has a very uniform light and shadow pattern and the Natural White version has a good CRI of above 90 and did well in all my tests! The strip also has a good copper amount, not as much as the Colordiode strips but thick enough the transfer enough power to not see any dimming on the strip itself! The only downside of the strip I could find is that because of the small LEDs the dispersion pattern seems less then 120 degrees like you see with other LEDs but especially with a diffuser in front of it (aluminium strip to provide some cooling) I don’t think that’s going to be a big issue.

I have tested their Ra95 version strips and found them to be okay. They don’t have the pleasant glow the Colordiode or Auxma strips have but they perform ok. You can often find these a bit cheaper with a higher LED per strip count then the Colordiode/Auxma versions. I can’t verify if they are truly Cri/Ra 95 but they seem to perform at least ok. These are the strips also used by the “DIY PERKS” YouTube channel! But when given a choice I prefer the Colordiode or Auxma strips and then the cheaper alternative versions just above here before I’d buy more of these.