Most common LED strip is sold is 12v. I think this is because it’s compatible with generic power supplies, car voltage, etc.. But especially when using longer lengths (More then 1 or 2 meters, depending on strip quality) a problem pops-up.

An LED strip is constructed of flexible PCB on which traces are laid out. For instance for a warm white LED strip this would be 2 traces, positive and negative voltage. These traces need to carry all the current through the LED strip. Copper is expensive though so manufacturers try to get away with using as little as possible. The less copper is used, the higher resistance which causes something called “voltage drop” together with heat. 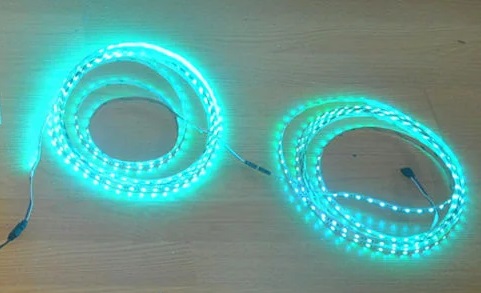 What voltage drop basically means is that the voltage you send into the strip is not the one you receive at the end of the strip. An example, with cheap LED strip you can feed the strip on one end with 12v but once it’s gone through 5 meters of strip, it might have dropped down to 9v or even 8v because of all the resistance in the copper traces. That means a lot of power is lost and exchanged into heat but also that the light output of the LED strip at the end will be much lower than at the beginning. Something which can become visibly noticeable after only 1m to 2m depending on the quality of the strip and the thickness of the copper used on those strips. 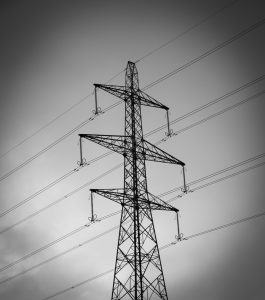 There is a reason these are called “high voltage” lines

The simple answer to this question is, 24v! The reasoning behind this is because 24v is able to transfer power more efficiently over a given trace width and copper amount then 12v and can thus transfer the power without suffering as much loss as 12v would have. That means strips with less copper don’t fade as much when using 24v vs the same trace and copper width using 12v and thus you can get away with more length and less complicated cabling in reality.

Since learning this I’ve only purchased and used 24v LED strip!

All analog QuinLED dimmers accept an automatic voltage range which always includes 12v and 24v. Currently QuinLED-Quad is officially limited to max 28v, QuinLED-Deca is capable of functioning up to 50v!

*Detailed wiring diagrams are available per board, please see the main index page.

*Additional info can also be found in this article talking about wire thickness needed.

Although smaller lengths are okay when just feeding them from one side, if you want to make sure your longer lengths are going to work and display an even brightness you should always dual feed (beginning and end). Most high quality strip often comes with wires attached to both sides of the strip to make this easy!

As a general rule of thumb, when using 24v you can get away with segments of about 2.5m or about 8.2 feet. If you go above that, double feeding is recommended. At 5m (16.4 feet)(the length most strips come in) you will certainly need to double feed to not have too much of a faded LED strip at the other end.

For very long lengths (above 5m), triple feed (beginning, middle and end) your LED strips. This will make sure you have a perfectly and evenly lit LED strip. The length where this starts to matter varies on power usage, voltage and strip quality but with a triple feed you should be good up to about 10 meters (~32 feet) most of the time. If you want to go longer than that, you are going to need to inject power into the strip at more points (beginning, 1/4th, 1/2, 3/4th, end), etc.

As a general rule, don’t use multiple power supplies to power one device (or strip)!

When using a QuinLED dimmer make sure to take all the feeds from the output terminals and not directly form the power supply. The dimming is done using PWM on the negative voltage, if you would connect a power supply line bypassing the dimmer, the LED strip won’t be dimmed anymore. If you need to go above 10 meters, depending on power usage of the strip and max output per port of the board you are using, consider using multiple output ports for different sections.

There is an exception to the above rule and that is constant current LED strip. Although CC LED strip can’t be an unlimited length and above practices (Highest voltage you can get) still apply, CC LED strip is constructed differently which causes a lot less voltage drop with length.

Most LED strip is still Constant Voltage (CV) though and and High CRI/Ra value CC LED strip is very difficult to find, 24v with dual feeding a CV strip is still mostly the way to go right now. If you do wish to use CC strip, I’ve tested with this QuinLED modules and it’s worked fine!

Also make sure to read my article about Constant Voltage vs Constant Current!